10 hours, 6 polaroids, and 3 sheets of film. Can you even imagine the torture that used to go into creating just one composited image? 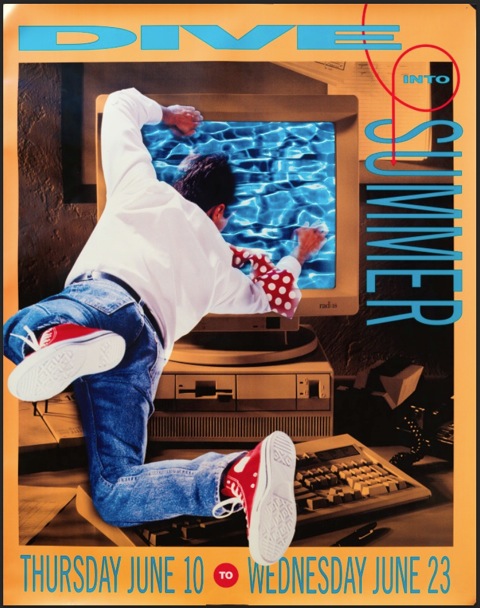 Studio 3’s David Bell approached this project with Reilly Jensen of Reilly Jensen Design for the ghost we now know as Egghead Software. The idea for this production was to create a series of summer sale posters that would adorn all of the the windows to this software retail chain. But Senior Lead Photographer, David Bell can tell you this was no stroll through the park. He used nothing but a few polaroids, a studio strobe, and 3 sets of film all composited in camera to make this concept a reality. I don’t know if you’re understanding correctly… THAT MEANS NO DIGITAL WORK- AT ALL! That is a toilsome task that would now be unheard of and would only be attempted by the bravest of artists.

Well, we’ve changed things a little since then. Actually, Studio 3 was the first commercial photography studio to dive into the digital world and uncover the realm of Photoshop. Now-a-days a composite like the one shown above would be accomplished through a simple process in which one of our digital pros would take several images, digitally clip them, layer them and VOILA! We’ve just cut down on 3/4 of the time it would take to composite an image the old-school way. Ahh, technology. Isn’t it great? It sure is.

And I know what you’re thinking now… “Wait, what the hell happened to Egghead?” Ironically enough, in 2001 the company’s computer system got hacked and soon after, our local favorite went under. But enough negativity. There are plenty of things to be thankful for… like top-of-the-line photography and first-class digital art. Did I mention we’re fun too? Give us a call, we have a margarita waiting for you on our terrace. Cheers.