Digital Artist Carl Beery brought in something new to work this morning — a great big tattoo! Congratulations, Carl! But what does it all mean? Carl writes:

I’ve often thought about getting a tattoo. Something that exemplifies my manly personality and follows the delicate contours of my muscular yet shapely bod.

I didn’t want to “start out small” and then “move up.” Sorry, Nancy, that’s not my style. My personal motto is “Go big or go home. Take it TO THE $@#&*% LIMIT.” But that is WAY too many words and symbols for rad ink. What typeface and kerning would I even use? Besides, I wanted my bold tattoo to supersede the xenophobic barriers of “language” and “literacy.” 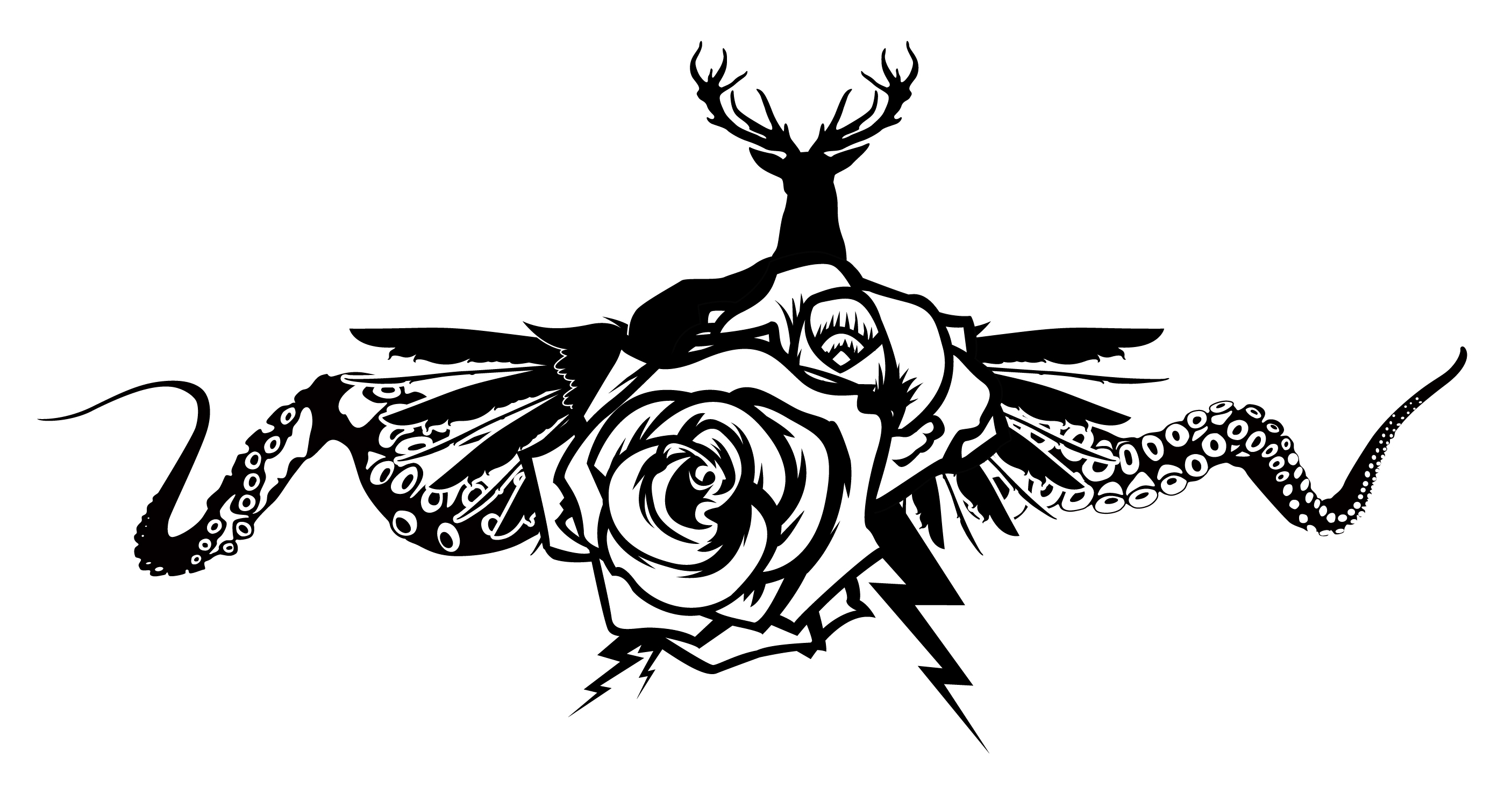 The final artwork from the Malaysian team

As a kid, my favorite animal was the octopus. To me, they were the bee’s knees of the animal kingdom. I recalled that when I was learning to swim, the only way my dad could get me to put my head underwater was to tell me that there was an octopus in the swimming pool. So I needed octopus tentacles on my awesome tat to remind me that people you trust will “sucker” you into achieving their own selfish ends, and that life is but a series of bitter disappointments. (There was no octopus in the swimming pool, if you were wondering.)

A rose. I also needed a rose or two in the design to symbolize my passion. Also, I’ve heard myself described as “A very thorny dude.” Don’t get too close, I’m barbed wire.

I wanted some lightning bolts in the design. I couldn’t think of a better way to illustrate how my blank stares far off into the distant horizon are suddenly interrupted with a flash of razor-sharp wit and biting sarcasm. (Usually from someone else’s mouth, but occasionally from my own.) I still wonder why my parents named me “Carl” and not “Ka-POW!”

Wings. Wings would demonstrate my inborn ability to see things from a great vantage, and to be above it all. Also my humble and angelic nature. Not only that, but wing tattoos were really cool about 6 years ago! They are nearly timeless!

Finally, I needed a silhouette of a stag. Personality tests I’ve taken – mostly while heavily sedated and in restraints – have concluded that I am not a strong alpha-type. I can only assume that means I am the Meta-Alpha-Type, The Leader of the Alphas. I wanted to let everyone who saw my tattoo know that I was their true torchbearer, The Mostest Chosen One.

I had my Malaysian team art-work the design, while I labored over the last big question: Where on my fancy bod do I place it? Arm? Nah, on these guns the design would either look too puny or cost a small fortune in ink. Thigh? Hmmm, that’s getting warmer. But the same issue with ink cost — they’d need a couple of barrels of ink to cover these tree trunks. Chest? No, nobody has wings on their chest, c’mon! I chose having my studly tattoo done on my upper back.

When I presented the final design to Jack, my tattoo artist, tears welled up in his eyes. He began to tremble, his chortles of sobs professionally confined behind his emotive grimace. Obviously, he was overcome with the beauty and rich symbolism of the Malaysian design. Just the effect I was going for. Once he’d composed himself enough to speak, he asked, “Aaarrr you sure you want this?” I knelt down and bowed. With confident humility I said, “Yes, Sir. I am worthy of this body art.” He asked where I wanted my first tattoo. I spoke with conviction, “Give it to me on my back, Cap’n Jack!”

His emotions collapsed to an unbridled joy. Jack let loose an effulgent belly laugh which sent his facial piercings and chin braids swinging fore and aft, port to starboard. Still smiling, he suggested moving it down a bit. “It’ll be less painful if it’s not on your shoulder blades, me matey.” “You’re the artist,” I said.

After a few achy hours under Jack’s gun, my body art was finally complete. I was awash in a golden glow of wholeness and self-actualization. My co-workers Alex and Megan are astounded by the raw power and awesomeness of my new skin, and how it exemplifies my true nature. 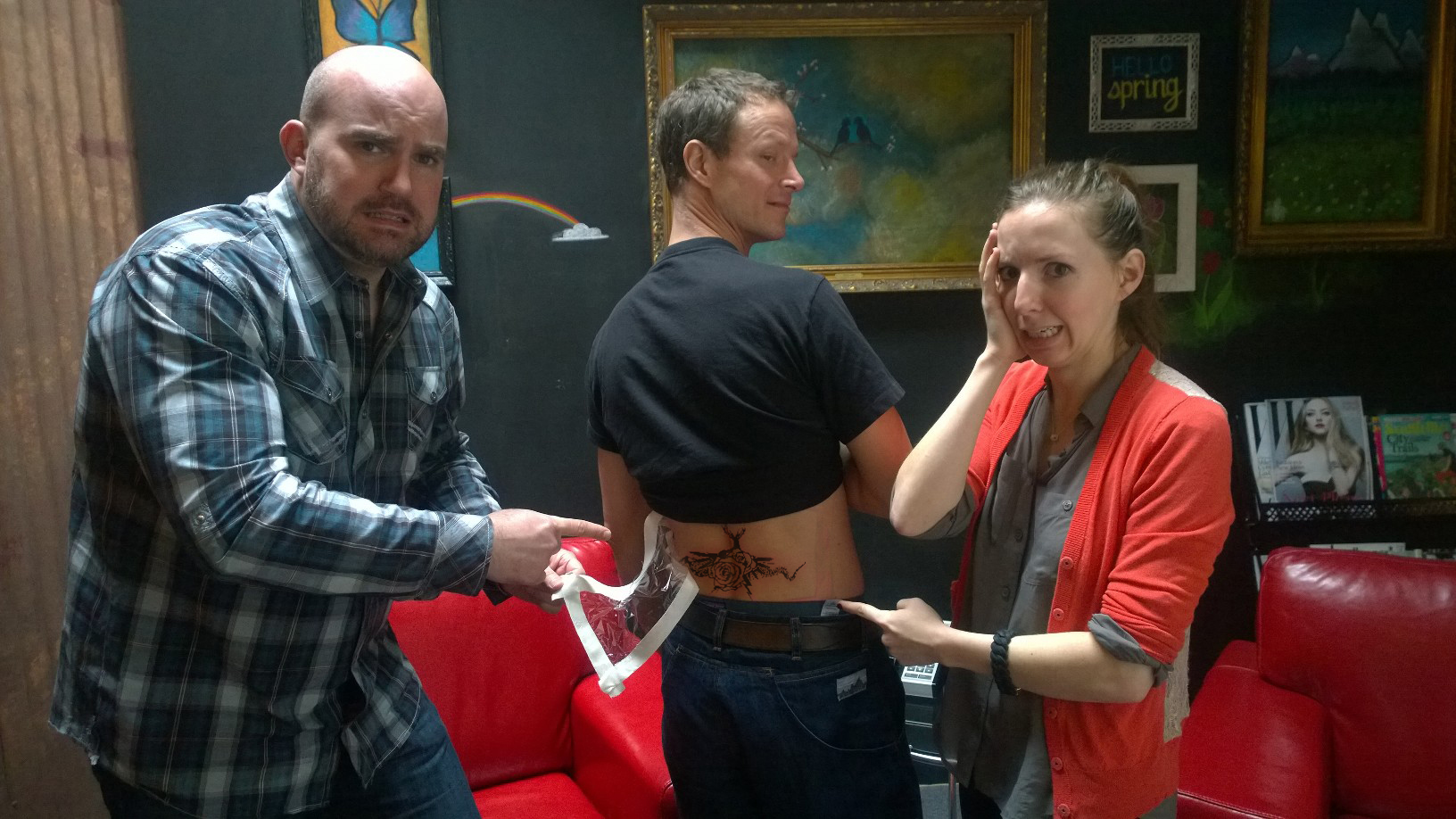 I sure like how my rad tat turned out. What do you all think?

Happy April, everyone. Please don’t do anything foolish.