It’s a bird! It’s a plane! It’s….a….Nike Columbia? Reintroducing Nike’s soaring style named after it’s twin, NASAs Space Shuttle Columbia. This ground breaking style, very much like the Columbia Space Shuttle, is meant to endure long (st)rides. In an effort to blast this amazing new running shoe into the world of athleticism and fashion, Nike made sure to run it through several laboratory tests. According to the article below, after more than 800 miles, the shoe proved to show no loss of cushioning and minimal wear on the anatomical outsole. To launch this shoe the right way, David Kennedy, of Wieden & Kennedy, asked our team at Studio 3 to hop on board for this project. We then worked together, and knocked this Nike ad out of this world. 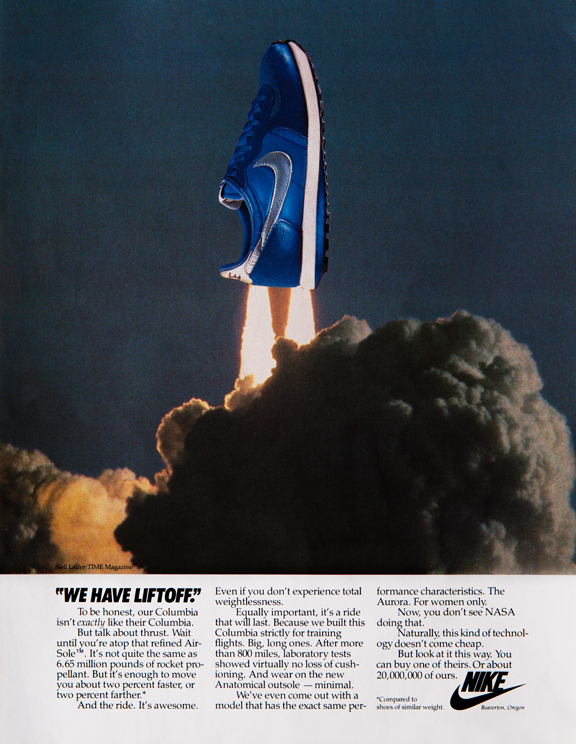 When Studio 3 Lead Photographer, Craig Wagner, was asked to shoot this product – he was excited to the moon and back. Keep in mind, this ad was done in the early ’80s during the pre-digital days.

“We worked with Wieden & Kennedy quite a bit when they first started out. It was great to collaborate again on this project and compile an image together before the era of digital technology. Wieden & Kennedy provided the idea and the stock image of NASAs Columbia Space Shuttle. I shot this on a Sinar 4×5. This was actually my first time taking an image and lighting the product to match.”

Taking a flight back in time with this ad shows that our capabilities and imagination are beyond the world of digital art and computer technology. A little bit of old fashion simplicity and creativity, in this day in age and in the future, can still do the trick. Call us to find out how we can provide you with a stellar production.